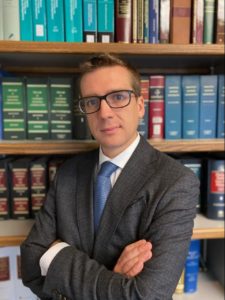 Hook, Seller & Lundin LLP is pleased to introduce its newest articling student, Ian Del Bigio. Originally from Manitoba, Ian spent a number of years during his youth performing with the Manitoba Theatre Centre and even toured with prominent entertainers from across Canada. Following this passion for the dramatic arts, he studied English literature at the University of Lethbridge and worked in film and television in Vancouver prior to turning his attention to legal studies.

This background in narrative, and an enthusiasm for social justice, is what propelled Ian to study law at Bond University in Australia. He sought out the school because of their impressive mooting record and made his own contribution to that legacy when he was recruited for Bond’s 2020 International Criminal Court Moot team. Despite not being able to argue their case in the Hague due to the Covid 19 pandemic, the team placed 13th overall and received an award for best runner-up for their defence submissions.

After many years abroad, Ian is overjoyed to be back in Canada, particularly to Kenora in the lake country that he grew up in. He is keen to bring his passion for social justice to serve the Kenora community.