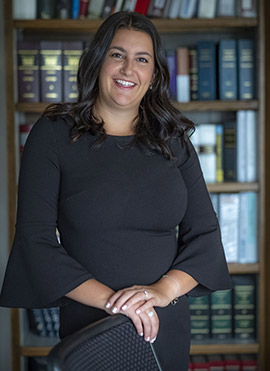 Profile:
Kim was born and raised in Kenora, Ontario. After graduating from Beaver Brae Secondary School she attended Brock University and obtained her Bachelor of Business Administration (Hons.) degree in 2011. Kim attended the University of Newcastle, Australia and received a Bachelor of Laws in 2014 and was admitted as a solicitor of the Supreme Court of New South Wales.

While attending law school Kim held a position on the Law Student’s Association and gained practical experience working at the University’s Legal Centre. She returned to Kenora to complete her articles with Hook, Seller & Lundin in 2015 and joined the firm as an associate upon her call to the Ontario Bar in January 2016. Kim became a partner in the firm January 1, 2020.

Community Involvement:
Kim is the current Chair of the Lake of the Woods District Hospital Foundation. She has previously served on the Board of Directors for the Kenora & District Chamber of Commerce and as Secretary-Treasurer, Vice-President and two terms as the President of the Kenora District Law Association.