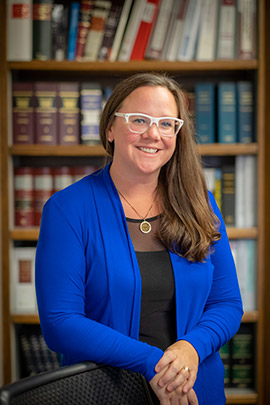 Cheryl has a variety of experience in the Kenora legal community. Cheryl was a summer student at Legal Aid Ontario in Kenora in 2004 while working towards her law degree and she also completed her articles with the Ministry of the Attorney General – Crown Attorney’s Office in Kenora.

Cheryl enjoys many activities including fishing, snowmachining, cooking and reading.

Achievements
During law school, Cheryl was awarded the D.A. Thompson, Q.C. Prize for highest standing in Property Law. Cheryl also volunteered as an executive member of the Manitoba Law Students’ Association filling the role as Treasurer in 2003-2004 and then as Executive Director in 2004-2005.

In university, Cheryl was President of the University of Manitoba Best Buddies Organization chapter. Best Buddies creates opportunities for one-to-one friendships and leadership development for people with intellectual developmental disabilities.

Professional Associations
Cheryl is a Bencher of the Law Society of Ontario. She is also a Past Chair of the Federation of Ontario Law Associations (FOLA), formerly the County and District Law Presidents’ Association (CDLPA). She was Chair from May 2014 to November 2015 and remained on the board until May 2018. FOLA is a provincial organization whose focus is on advocating on issues affecting the practising Bar and local Law Associations. Prior to that, Cheryl had served as Northwest Regional Representative since 2011.

Starting December 1, 2018, Cheryl has been an appointed member of the Ontario Judicial Appointments Advisory Committee, and is now in her second term. Effective June 2021, she has joined the Board of the Ontario Deputy Judges Association as a Northwest representative. Locally, she sits as a member on the Pellat United Firefighters Board. She is also a current member of the Women’s Law Association of Ontario.

Cheryl was on the provincial Board for LibraryCo from November 2015 to December 2019. Cheryl has also served as Secretary-Treasurer, Vice-President and two terms as the President of the Kenora District Law Association.